Update: A new version has been released, get Mozilla Firefox 17 instead of downloading this version. 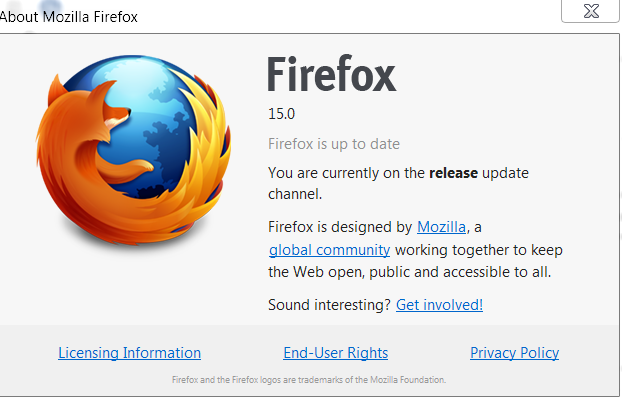 If you’ve not updated your firefox for a long time, its time to update firefox now as Firefox 15 has improved Homepage with quick access to useful firefox settings. The new Tab page contains big thumbnails of the most visited websites. Firefox crashing has reduced to a considerable degree. Memory usage has been optimized a lot. It automatically updates. It now starts faster. Heavy, light, ultra modern, classic – all types of websites render beautifully on Mozilla Firefox unlike other browsers. Lots of new extensions have beccome available which limitless the features and usability of firefox. Firefox persona or so-called Firefox themes add to the beauty and newness of it as you can change it with just a few clicks every other day to have a feel of beauty in your favorite web browser.

Download Firefox for Android Mobile and Tablets from here . If you’ve Mozilla Firefox already installed on your system and if it’s not updated yet. Just launch firefox – go to firefox menu – help – About Firefox. Now it will start checking for the latest firefox version and then will download update if required. When the download completes, just Hit on Apply Update button and Firefox will restart (before clicking on Apply Update button, save your work – whatever you’re doing on firefox). It’ll check for compatibility of installed addons with Firefox 15 and may present a dialog box if incompatible addons are found. Just hit on Check or Don’t check button and proceed with it.