Update: You can buy Micromax A116 Canvas HD from micromaxinfo.com, official Micromax website, starting 14th February. The mobile will be available for online order exclusively on Micromax’s official website and then will be available for purchase from other online retailers as well as from local retail stores shortly. Keeping the huge demand generated in mind, phone’s availability and stock outage issue may occur!

Micromax has raised the bar of expectation with its announcements of A116 Canvas HD quad core smartphone below Rs 15,000 price range. This news send vibes among gadget lovers and many consumers are eagerly waiting for its release to get hands-on and see if the phone is that amazing as it sounds in its specifications chart. According to a recent report, Micromax A116 Canvas HD release date will be slightly delayed and postponed to the end of February month, or say start of March. The delay is because of shortage and delayed supply of parts from Micromax’s chinese partners. Due to new year festivity in China, production has slowed down in China and this resulted in shortage of supply of certain parts, which has caused Micromax to delay its plan of releasing the phone by few weeks. As soon as things are back to normal state, production will be at its full speed. 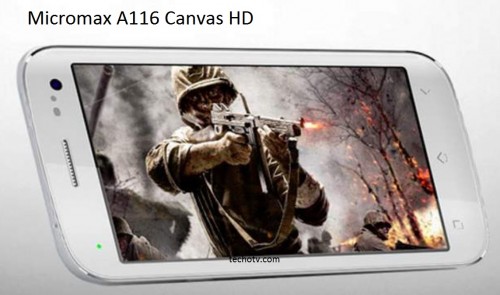 Micromax Canvas HD has opened market for cheaper quad core phones. Karbonn has also launched Karbonn S1 Titanium cheap quad core phone in India, but with inferior specification in comparison to Canvas HD phone. Micromax A116 Canvas HD has 720p IPS display in addition to quad core processor and 1GB of RAM. It’s a 5-inch jelly bean android phone with dual-sim capabilities. It has 8megapixel rear camera capable of capturing Full HD videos of 1080p quality, whereas at the front it has meager 0.3mp camera of VGA quality. It is expected to be released at a price below Rs 15000. You can check its full specification below:

We’ve also heard that Micromax is gearing up to launch more android phones sooner offering more choices to consumers and adding more competition in the already flooded cheap android phones market in India. Stay tuned with us for more updates and phone news.