LG has officially announced Optimus L4 II (E440) and L4 II Dual (E445) in Russia. Its availability and release in other markets have not been confirmed yet, but we expect it to be available in other Asian countries also sooner, including India as India is also one of those markets where dual-sim handsets in budget segment score good sales. The specifications are the very entry-level type and not much to talk about. 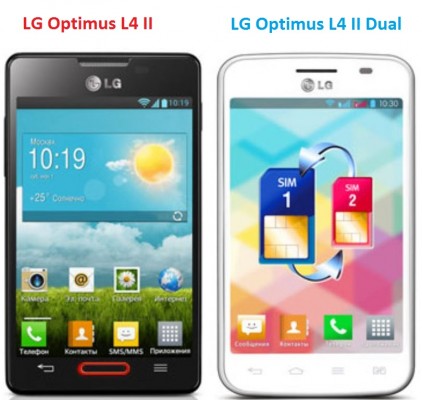 Both the variants feature the same specs, except the dual sim capabilities in Optimus L4 II Dual model and presence of dedicated sim switch key. Optimus L4 II single sim model has physical home button with smart led for notification, this feature is not present in Dual SIM model. Everything else is the same. Both have 3.8-inch IPS display (this size is uncommon) and hvga resolution of 320*480 pixels. The touchscreen is of capacitive type (Bad days of resistive touchscreens in smartphones are almost over). Both are powered by 1GHz mediatek chipset. It’s a single core processor accompanied by 512MB of RAM. The internal memory is 4GB, however user-available will be lesser. There is 3mp rear camera with LED flash, but disappointingly, no front camera. 3G network and data support is present, along with WiFi, bluetooth 3.0. 3G is supported on 1st sim card only in dual sim model. 1700mAh battery is there which should be sufficient for this smartphone.

The phones will go on sale in Russia from June at price of 5990 Rubels. Its price and availability in other countries are not certain yet, but we’d keep you updated if we get more info on the same. Stay tuned with us.