Apple announced the new Mac Pro at its World Wide Developers Conference. The Mac Pro has taken a new shape and form factor resembling a capsule, unlike the previous generation’s box-like shape. However the new Mac Pro has shed the handles which the previous generation had. We are completely fascinated by its design and looks. The Mac Pro is the ultimate pro desktop machine aimed to deliver high performance for power users. So the new Mac Pro is equipped with striking looks, state of the art architecture, thoughtful design, high powered graphics chipset, improved I/O and lot more. It is equipped with the powerful new-generation Intel Xenon ES chipset under the hood which packs in enough power to discharge all throughout your pro tasks. This chipset has 12 cores of seamless processing power and offers speeds upto 40 GB/s over PCI express bandwidth. It is equipped with the all new third generation PCI express bus. The floating point performance is two times faster than the previous  generation Mac Pro. It clocks 7 terra flops per second on floating point operations. That’s quite a huge amount of muscle under the hood. The Mac Pro also uses a fully optimised memory unit to complement the I/O and the processor. The ultra fast memory bridges the gap between the powerful processor and the blazing I/O. The memory unit includes a 4 channel DDR3 memory controller which runs at 1866MHz. It clocks upto 60 GB/s which lets you fly through most of the high powered tasks in a jiffy. The memory is a ECC memory which uses Error Correcting Codes to deliver simultaneous uninterrupted video export, rendering and simulation even during transient memory errors. The bandwidth is 2 times faster than the previous generation Mac Pro which offers only speeds upto 30 GB/s. Moving on to the graphics, the Mac Pro is powered by dual AMD graphics chipset. Each of which is a state of the art AMD FirePro workstation class GPU built with 6GB of VRAM. Summing it up, you have 12GB of extreme GPU power to play around multiple high graphic intensive tasks like seamlessly editing full resolution 4K videos while simultaneously rendering effects in the background and still be left out with enough power to pair upto three high resolution 4K displays. Whoa! monstrous power I should say. Moving on to the storage, it offers a newer version of flash called the PCIe flash storage which is 2.5 times faster than latest SATA solid state drives and upto 10 times faster than the traditional 7200 rpm SATA hard drives. The PCIe flash drive is directly connected to the PCI chipset to offer parallel interface. It also uses an Express based on-board controller to deliver speedy access to data. With the new PCIe based flash technology, booting up, opening large files and apps happen in a flash. The Mac Pro packs in unthinkable amount of power in an unimaginable amount of space and that is possible because of the ingenious unified thermal core. The high powered Xenon processor, dual AMD graphics and the PCIe memory builds up a large amount of heat. Only a high powered thermal system can keep the system cool. The unified thermal core is designed to maximise airflow as well as thermal capacity. It works by conducting heat away from the CPU and GPU and distributing the same across the core. The top of the Mac Pro has a large vent and guess what, it has a big fan underneath. Instead of adding multiple small fans across the machine, the engineering team at Apple has decided to go with a single high powered large fan at the center. It has enough power to suck in heat radiated by all components and push it through the vents. It pulls air upwards and as the air passes through the tunnel, it absorbs heat and carries it to the top. Quite a tremendous amount of engineering is involved here. This design makes the fan operate at low sound levels and yet produce maximum cooling effect. To achieve this, the engineers at Apple had to consider every aspect like the size of the blades, number of blades and the pattern of arrangement of blades. The retina MacBook Pro which released last year also had a different approach to eliminate heat out of the machine. It used an asymmetric fan blade technology to push heat out of the vents. The Mac Pro’s fan design minimises air resistance as the fan blades are backward curved impeller blades that run at lower revolutions per minute. Due to all these factors, it draws air more efficiently and creates less noise. 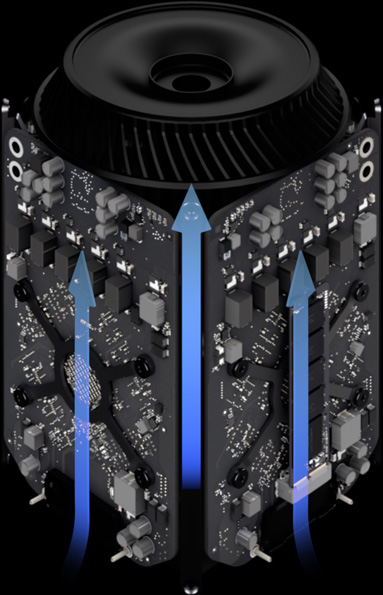 The Mac Pro is built in with the latest Thunderbolt 2 technology, USB 3.0, Gigabit Ethernet and HDMI 1.4. With all these, the Mac Pro offers immense scope for expansion. Thunderbolt being the fastest and most versatile technology, Thunderbolt 2 is also built on the same platform and offers faster I/O speeds than Thunderbolt. It is 25 times faster than FireWire and clocks transfer speeds upto 20 GB/s. It also offers scope to daisy chain upto 36 devices and connect upto three 4K displays. The new Thunderbolt 2 ports allow you to connect massive storage devices and work at high speeds, add a PCI expansion chassis and connect to 4K displays all at once with uninterrupted speeds. The HDMI 1.4 port connects to the latest television sets, projectors and external displays(which lack thunderbolt). The USB 3.0 is the fastest in USB standards and offers speeds upto 5 GB/s. The most interesting feature in the Mac Pro is its motion sensing technology. It has inbuilt motion sensors that detect your motion and  automatically illuminates the I/O ports when you turn the Mac Pro to connect your I/O devices. That’s pretty amazing and thoughtful indeed. The Mac Pro also uses advanced wireless standards like the 802.11 ac and Bluetooth 4.0. It is the fastest and most reliable way to connect all external peripherals like keyboard and mouse without having to attach physical cables which tangle around everywhere

According to us, the Mac Pro is an extremely well built machine with all curves outside and yet, all muscled up inside. This is the BEAST of machines which uses state of the art technology to deliver maximum power. If you rely on your desktop for high powered processor and GPU intensive applications, the Mac Pro is the perfect machine that is crafted for you.The Mac Pro is the first ever Mac to be designed and assembled in the U.S. Apple hasn’t announced its plans for Mac Pro yet nor any details on its pricing. Like every Apple devices, it sure will cost heavy on pocket. It is believed to be released later this year. Stay tuned for more updates on this.